Skip to content
Davis Rea Ltd. Technical August 16, 2018October 9, 2018 4 Minutes
Key Points:
• Major U.S. dollar bull markets and Fed rate-hiking cycles usually cause serious problems for emerging markets.
• Turkey is mired in crisis that is largely of its own making. However, a number of emerging market economies have similar problems and are vulnerable to spillover effects.
• Developments thus far are not that worrisome, but contagion is a risk.
• A key sign of growing risks would be the currencies of better-managed emerging market economies (notably India and Chile) starting to fall more quickly. This would be a critical sign for a more cautious investment stance.
Details:
• Since the advent of floating exchange rates in the early 1970s, there have been three secular bull markets in the U.S. dollar – 1978 to 1985; 1995 to 2002; and, 2011 to now. See Chart 1.
Chart 1: Trade-Weighted U.S. Dollar Index
(Source: Thomson Reuters Datastream/Davis Rea Ltd.) 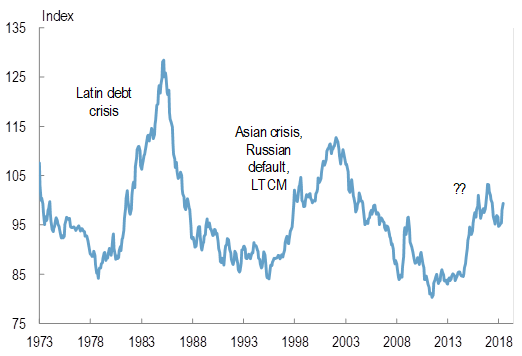 • The first two dollar bulls contributed importantly to, or even triggered, emerging market (EM) crises – the Latin American debt crisis of the 1980s and the Asian-LTCM crisis and Russian bond default of the 1990s. The Fed also raised rates during the first part of both of these periods.
• In the lead-up to both crises, EM economies borrowed heavily in U.S. dollars. They also had predominately fixed exchange rates. The rising dollar and higher U.S. interest rates made it difficult to service the debt. When their currencies devalued, they defaulted.
• History is repeating itself as the current dollar secular bull market continues, and the Fed pushes the Fed funds rate higher. Charts 2 and 3 show how many EM currencies have performed since 2011. Outside of the two pegged rates – Saudi Arabia and Bolivia – all EM currencies are weaker against the greenback. Some are much weaker than others, notably those with poor domestic macroeconomic policies (inflationary monetary policies and big budget deficits). Most of the currencies we illustrate have good-sized current account deficits, which implies a shortage of domestic saving and a need to borrow from abroad.
Chart 2: Select Emerging Market Currencies Versus the U.S. Dollar I
(Source: Thomson Reuters Datastream/Davis Rea Ltd.) 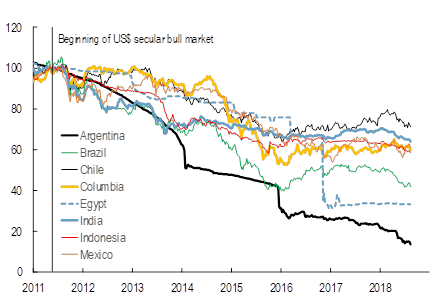 • Many EMs have borrowed heavily in U.S. dollars and euros – see Chart 4, both panels.

• Chart 4 (right panel) shows that Turkey has roughly $321 billion worth of foreign currency debt denominated in U.S. dollars ($196 billion), euros ($119 billion), and Japanese yen ($6 billion). This has become materially harder to service since the lira started plummeting.
• Foreign banks are on the hook for a chunk of this – France $20.1 billion, Italy $16.6 billion, Japan $13.7 billion, Spain $34.8 billion, U.K. $15.6 billion, and the U.S. $16.2 billion. Spain’s exposure amounts to about 2% of total bank assets, so these numbers are not all that big. Canada’s exposure is trivial ($1.2 billion).
• So far the movements in EM currencies suggest that idiosyncratic factors are driving the relative performance of EM currencies against the dollar. However, the secular dollar bull market, rising U.S. short-term rates and current account deficits in many EM countries suggest that a broader contagion is a risk.
• Both of the previous emerging market crises were troublesome, but neither contributed to a global, U.S. or Canadian recession. The 1997-98 crisis caused a growth slowdown, an equity bear market and a big drop in the Canadian dollar.
• Two big differences in the current U.S. dollar bull market are that most major emerging markets have flexible exchange rates, that smooth out some of the adjustment, and most flexible EM currencies are currently undervalued against the U.S. dollar. During the previous two EM crisis periods, the pegged EM currencies were overvalued against the U.S. dollar. Nonetheless, materially weaker currencies like the Turkish lira still make it difficult to service hard currency debt. Unless something changes in Turkey, a bailout is a possibility.
• So far, the upheaval in EM currencies does not look overly worrisome, but some contagion is a risk.
• If we start seeing signs of contagion, where the better-performing EM currencies from better-managed economies get hit and start falling much more quickly, the outlook would deteriorate. In this case, we could get something that comes close to 1997-98 in terms of severity.
• International economic and financial crises always need some cooperation and coordination amongst global policymakers. The 1997-98 crisis was resolved by action from the IMF, the U.S. Treasury and the Fed. Thailand, Indonesia and Korea got IMF bailouts, and the Fed intervened quickly and aggressively in LTCM.
• Turkey may need a bailout to avoid default, and I find it hard to believe that the Trump Administration will allow U.S. funds to be used either directly or through the IMF. Recall that the GOP-controlled Congress under Newt Gingrich tried to prevent the Clinton Administration from helping bail out Mexico in early 1995. Bill Clinton and Robert Rubin had to find a workaround to stabilize Mexico’s economy and financial system. Turkey’s defiant response to the crisis suggests an unwillingness to accept the restrictive conditions that come with IMF funds.

• If Turkey or another country needs a bailout and one is not forthcoming, we could see an emerging market variant of the Lehman moment from September 2008. We would be in uncharted territory and that would be problematic for financial markets. I believe that any chaos would be much less severe and shorter since it would likely push the European Union (to prevent millions of Syrian refugees currently in Turkey from flooding into the E.U.) and China into taking action. Russia may also jump in to try and gain influence over Turkey, and get it out of NATO.

Thank you for reading,

One thought on “Technical: Turkey Is In The Oven”

Our blog is where we share updates, news, and articles from the firm to provide insight into what we do and how we think.